Tarot can help provide us with the key to unlock those doors within our mind and soul, those doors that require puzzle pieces fitting together for us to be able to make sense of them and thus be able to pass through, those doors that reveal who we truly are under our many outward layers. Tarot has the ability to make us realise who we truly are and what we are truly about, as humans we have a tendency to get lost within our own mind and our own expectations that we frequently lose sight of our path, struggle to connect our feet with the ground, and end up spiralling into the unknown whilst trying to govern our daily lives. Tarot can help clear the fog so that we see the path again, help bring us back down to feel the Earth beneath our feet, and help point us in the right direction to get going again. Tarot sees us for who we are and makes sure to shine a light on what we need to see the most, even if we don’t realise it at the time.

The Light Seer’s tarot deck is a 78 card tarot deck that has reimagined the traditional approach and put a boho-esque spin on a deck that is all about highlighting both the light and shadow aspects of yourself with help of enchanting art designs, that are fantastically eye-catching and thought evoking, throughout the cards. The artwork on these cards differ from the usual Tarrochi style we are all familiar with when it comes to tarot, which is more art-nouveau, are they are more flamboyant, more colourful, more modernised, and nature is a big part of the illustrations on most cards; such as the Eight of Pentacles being represented by the phases of the moon. Eye-catching, vibrant, different, the artwork on these cards evoke such a new way of reading them as they are so different to the traditional artwork usually used to represent the cards. Take the 2 of Cups, one of the minor arcana cards, this is usually depicted as two individuals, usually one male and one female, each holding a cup as they gaze across at one another. In The Light Seer’s deck, this is represented by two hands intertwined with colourful streams of almost an energy like source coming down from their fingers and into two cups below them. This is such a beautiful reimagining of a card that represents harmony, love, union, and soulmates, and it naturally evokes that thought of majestic beauty in both love and romance, it really captures the essence of what the card is about without replicating the standard image.

The King of Wands is normally represented by a King sat upon a throne whilst he holds a wand that is coming into bloom, he is also depicted from a side angle, whereas the King of Wands in this deck is front facing and represented by a man in regular clothing, holding a long wand, with a burning crown at the end, and a Lion in the background behind him. This symbolism is powerfully on point for a card that represents being centre stage, that takes charge, that is all about authority and being pro-active about your decisions. The boldness of the character on this card, along with him holding your gaze as you look at him, with the Lion in the background gives you nothing but the sense of authority and confidence, even if sometimes that confidence can be a bit too much! You understand what this King is about and what he is here to say. He’s too upfront for you not to!

Or even take the Ace of Pentacles! This card is usually represented by a hand emerging from a cloud and holding a coin above a garden, in this deck it is represented by two hands holding a coin with roots emerging from the bottom and two stems starting to sprout out of the top. There is no doubt when viewing this card that is represents a strong foundation, building a strong base to a bright future, and in turn resulting in happiness and pure delight seeing the fruits of your labour begin to bloom.

The guidebook itself doesn’t necessarily insist of following specific spreads, more so turning to your own intuition to read how you want and what feels right, unless you choose to learn various spreads yourself, this deck is more open to reading how you want to with what your gut is telling you to do, this greatly benefits those that are learning to become more in tune with their intuition, and a many a tarot reader out there enjoy doing their own spreads over existing ones and this deck is fully behind that! But of course if you wish to follow a certain structure then there’s nothing stopping you; and there’s absolutely nothing wrong with that!

As an added bonus, if you go directly to the author’s website for this deck (https://lightseerstarot.com) and enter your details, including invoice number from your purchase, you will be receive an 88 page PDF document via email that includes a page dedicated to each card that includes a small description of the card as well as a notes section for yourself to write down any thoughts you have surrounding that card that you wish to jot down, which is incredibly useful for those that are learning to use tarot for the first time especially! 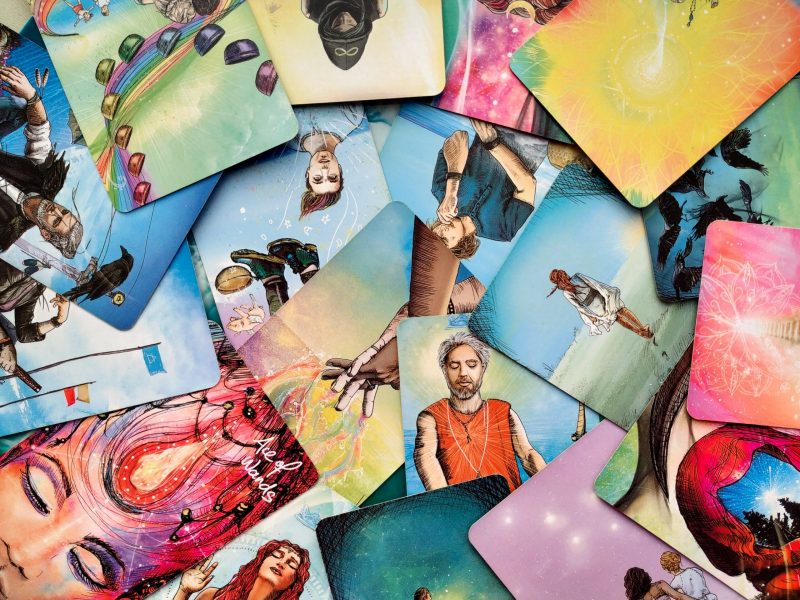 The fascinating art of Cartomancy. We live in an era where more and more people turn to tarot, and oracle cards alike, and learn how to read and interpret them for personal and professional use. The appeal? Guidance… to see through the looking glass; after all, we are a curious species by nature and if something can provide us with even the slightest bit of direction, we run to it! And rightfully so. For centuries we have turned to tarot cards for clarification, insight, direction, and sometimes something more. Chances are, if you have had a tarot reading with me, then the Magical Nordic Tarot deck is the main tarot deck I’d used.

The Magical Nordic Tarot deck is an absolute winner of a deck for both beginners and experienced tarot readers alike! Whether you decide this is to be your very first deck, or one you merely wish to add to your ever-growing collection (as let’s face it, who has just one tarot deck?!), this incredibly beautiful pip deck, by the well known Jayne Wallace, offers the opportunity for you to push your intuition and to become more in tune with yourself as, just like other pip decks, only the major arcana are illustrated. And that is exactly what a pip deck is! A pip deck is where only the major arcana cards are illustrated, the minor arcana cards have a very minimal design, and was actually how all first versions of tarot cards originally looked! The minor arcana are simply numbered and this can help us with tuning into our intuition and also remembering our knowledge of what the card itself means without relying on pictures to guide us, a lot of people prefer these types of decks as they know they are solely relying on themselves to be able to read without any pointers apart from the one word used on each card as a sort of ‘push in the right direction’ feature; but that is all they give you. This is why a lot of beginner readers enjoy this deck as it helps them remember the meanings of the cards, but also why it’s equally as appealing for experienced readers as artwork, or therefore a lack of, can prove a welcome challenge to those that don’t want to rely on imagery but solely their gut instinct.

But for the major arcana cards, such as the Empress, Justice, Wheel of Fortune, Death, and Temperance, the cards have been illustrated with the most illustrious artwork in line with the Nordic Gods and Goddesses, and even make references to Nordic runes, the Northern Lights, spirit animals, and the tree of the life. The deck manages to capture so exquisitely the absolute pinnacle of the Nordic beliefs. Those with a fascination or love for this spectacular corner of the world, or even the history or beliefs surrounding their Gods, will absolutely fall in love with this deck.

The guidebook itself is also easy to read, follow, and understand, and is a big factor of why so many readers enjoy this deck in particular. There’s no fancy jargon or complicated terms and meanings, the guidebook gets straight to the point about each card and what it represents without making things overly complicated. So unless you’re after some immense challenge, well…there’s a reason this deck does so well within the tarot community across the board!

Though you may find it useful to be fully up to scratch with being able to understand reversed cards as this deck doesn’t discuss what the reversed cards mean, and should one come up in your reading, the guidebook won’t advise you on how to read this as they solely focus on upright cards! But this deck is based on the Rider Waite tarot so researching and learning reversals is very much an easy task to do!

Breathtaking artwork, a straightforward guidebook, the push to tune into your intuition to better your reading ability. What more could we want?

This deck I absolutely bought just because it has the same name as my youngest daughter. My absolute joy when I discovered not just awesome descriptions for imagery, but the journal prompts and affirmations are fantastic.

NOTE FROM BACKYARD BANSHEE: As an Amazon Associate, I earn from qualifying purchases. This means that even though you won’t be charged anything more than the product price if you choose to buy it, Amazon will pay a small contribution to Backyard Banshee towards the running of this website through affiliate funding. This in no way affects our decision to promote these tools. This article was written for BackyardBanshee.com by  @vegan_of.vengerberg