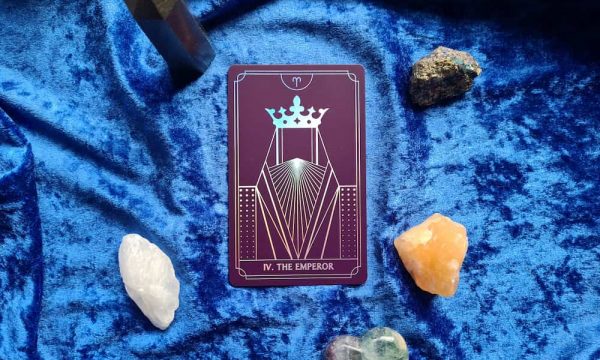 The Emperor represents one side of the duality of masculine and feminine, his other half is The Empress. These masculine and feminine energies aren’t necessarily gendered, every individual holds both within themselves, only more or less embodied and activated, depending on a multitude of factors making up our daily lives.

In the Tarot, this card speaks to that masculine side of our energies; the directive, structured, logical half of our creative force, while The Empress is the half that nurtures, flows, and feeds our creative force with gentle love.

Associated with the zodiac sign Aries, The Emperor is generally depicted on a throne bearing four ram heads. He holds a sceptre, representing his rulership, and an orb, representing the kingdom he rules over. Behind him are bare mountains, showing the dry force he rules with; whereas The Empress is associated with abundant foliage and nature showing fertility.

In this article, we will explore the different meanings of the Emperor Tarot card in various reading contexts as well as the different advice it can offer you. What does the upright Emperor (tarot card IV) mean?

The Emperor is the fourth (IV) tarot card in the major arcana. When The Emperor appears upright in a reading, you are being called to embody that masculine, leader energy. What area of your life do you need to show up in with a direct, focused, organised energy, in a no-nonsense kind of way?

Maybe you’ve been trusted with a responsibility that demands that kind of presence, or maybe you’re about to launch a personal project where you’re going to have to boss up. You’re going to need to follow your dreams by implementing some method and strategy to see them happen. 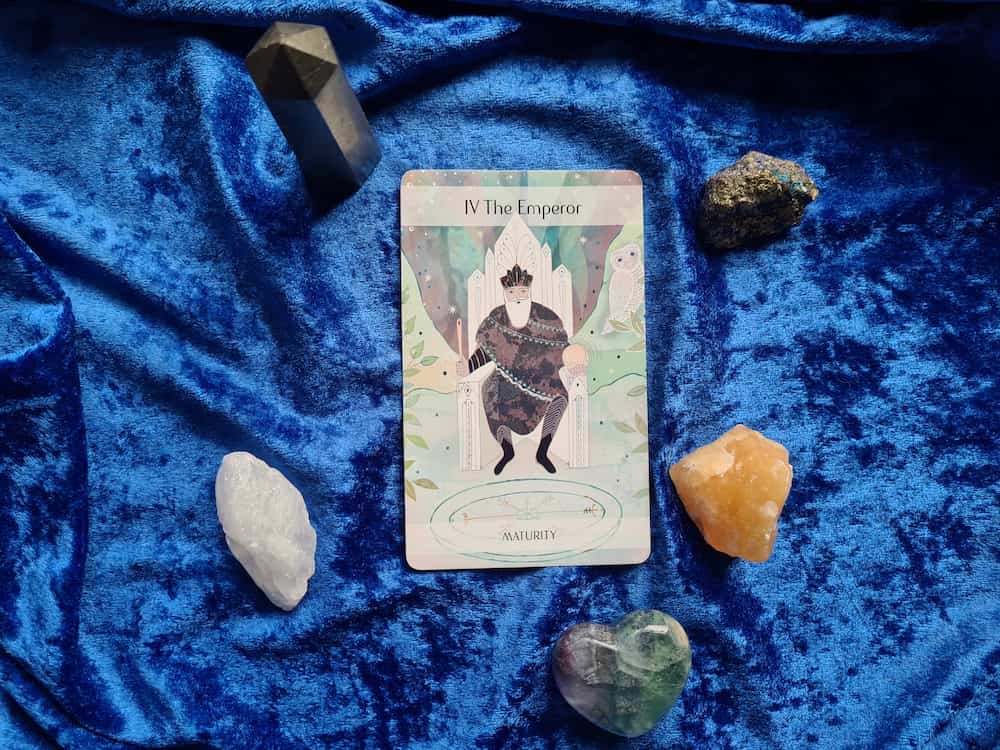 The Emperor is the card of authority, discipline, structure, and drive.

What does the upright Emperor mean in a love reading?

In a relationship reading, The Emperor doesn’t necessarily speak to a great deal of romance per se, however, it can indicate stability and drive. This can be a traditional, committed relationship, which can feel reassuring or stifling, depending on what you’re looking for!

The Emperor being linked to the Father archetype, without getting too Freudian, can indicate a relationship with someone that feels familiar because they have similar traits to one of your caregivers or someone that makes you feel provided for.

What does the upright Emperor mean in a career reading?

In regards to your career, The Emperor could be advising you to step up into that role or find someone to model it for you. For example, this could mean finding a mentor or a coach to help you implement the kind of Emperor structure and discipline you’re needing right now. Or otherwise, to channel your inner Emperor alone, and set up some routines that will help you meet your goals.

What does the upright Emperor mean in a health reading?

In regards to your health, this card could be trying to tell you that being too stoical in regards to your health isn’t the best option. Having a basic pain threshold is great, but ignoring your body’s needs is just counterproductive. Being strong will take you so far in the short term, but your body needs listening too and some empathetic care. Be wary of the path you’re on so that this full force you go ahead with doesn’t tip into burnout.

The Emperor Tarot card as feelings

Ever met an Aries? There’s a reason they’re the sign associated with this card. They don’t give up. They never stop. They’re represented by the Ram – butt-headed stubbornness and drive. Aries is ruled by Mars, the planet of movement, war and sex. All things that require a certain amount of momentum. Now, obviously, life, astrology and tarot are about balance and finding a flow. But sometimes you need a little bit of Emperor energy to get that big thing done – and although too much Emperor can be exhausting, this is why we love him.

What does the reversed Emperor card mean in Tarot?

The Emperor reversed is a reminder that we can’t be in control of everything in life, so many things will slip out of our grasp and we have to learn to accept them. Where in your life are you clinging on to control in order to feel safe? Where are you potentially being a little bit of a tyrant? A tyrant feels the need to be so harsh in his ruling because he lacks trust. How can you open up a little to confidence and faith?

Alternatively, this card reversed can point to someone in your life that’s exercising a form of authority over you, maybe a partner, boss, friend or family member. How can you exert your boundaries and take back some control? 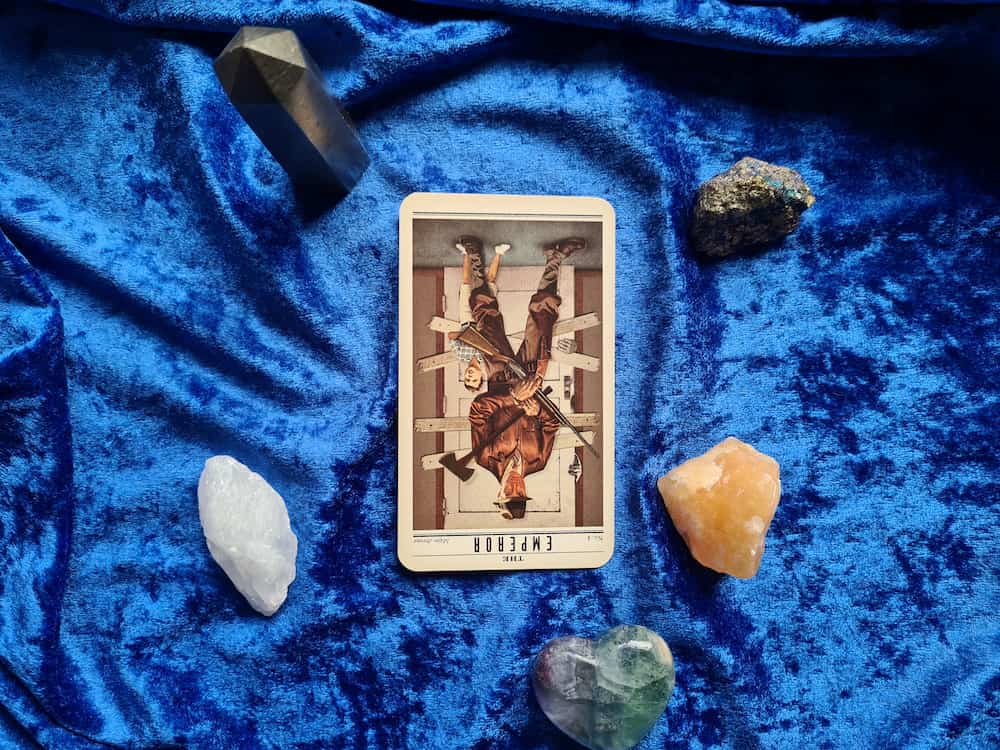 What does the reverse Emperor mean in a love reading?

In relationship readings, The Emperor reversed can signal a power imbalance in the partnership. Are you vying to be in control, to have the upper hand? Do you feel stifled by your partner? Is there a sense of overbearingness, maybe a lack of freedom? Do you struggle to trust their commitment to you? As always, communication can take you a long way. Open up the conversation about your mutual needs and boundaries and explore building trust together.

What does the reverse Emperor mean in a career reading?

In the workplace, The Emperor reversed can mean a lack of Emperor energy (no drive, no motivation, no discipline in regards to the things you should be working on) or too much of it (boring, repetitive administrative tasks maybe, or an overbearing senior colleague)! Either way, this card placement is an invitation to find more balance. How can you turn The Emperor around and use him to help you create the life you need and deserve ?

What does the reverse Emperor mean in a health reading?

In regards to your health, The Emperor reversed mainly indicates the presence of stress. Are you over-exerting yourself? Pushing yourself too hard and ultimately heading for a burn-out? How can you release a little and move with more flow? Alternatively, The Emperor reversed can signal a lack of structure and discipline that would actually be beneficial for your health right now. The Emperor’s advice is that it’s never too late to start again, to pick up your gym kit and to get back out there.

How to use the Emperor card in your Spellwork

Powerful moments to use this card in aid of your spell work would be: during Aries season when the New Moon is in Aries when Mars moves into Aries or into your first house (the house ruled by Aries in astrology) – but as a basic instruction, it’s for whenever you feel called to perform a spell to help you instil power and motivation into a chosen area of your life.

Please follow fire safety precautions. Use the card as a signifier (the central card of your spell) and spend some time centring and grounding yourself. Then, while gazing at the card, reflect on what power means to you, while breathing deeply.

When you can feel this sense of power in your whole body, write out affirmations of your personal power and capabilities. Try “I am intrinsically powerful.” or “My strength upholds me and is a constant flow.” Spend some more time repeating those affirmations to yourself, perhaps coupled with some repetitive movement, like tapping your face, head, chest or your knees if you are sitting to help record the message into your body as you speak the words – Aries rules the first house of the physical body!

Then light the paper with your affirmations on fire and watch it burn while holding on to that feeling of inner power. Mix the ashes into salt to make black salt you can use in future spellwork!

You can finish off with a cup of ginger tea (one of Aries herbs) and sip with intention, remaining focused on those affirmations.

The Emperor symbolism with archetype psychology

The Emperor, in terms of archetype psychology, relates to The Father. The Father embodies the duality of the masculine, the dark and the light. The light side is the energy of power, strength, loyalty and wisdom. The dark side is that of tyranny, lack of empathy, coldness and rigidity. This dark side often materializes as a literal or figurative absence. As Kim Krans says in her Archetypes Guidebook, “The Father […] is both the guardian and one who leaves us to the wolves.”

This archetype demands of us that we reposition him as a human person with human limitations – the Father was once the Child. The Emperor is a ruling power in his own kingdom, but there is a whole world outside of those borders, where he is simply a person like any other.

If you want to know more about the different tarot cards, feel free to check out our complete list of all 78 tarot cards and their meanings. 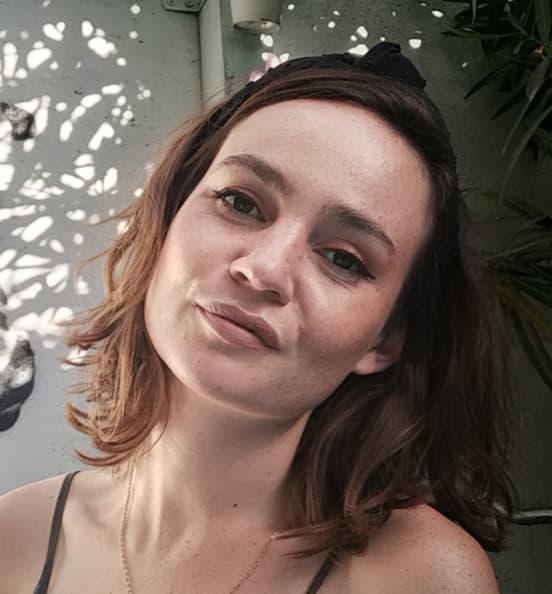 Daisy Forrest is a queer, neurodivergant witch, astrologer and writer based in France. As a qualified community organizer and space holder, with years of experience in workshop organization, she also holds virtual events via her Patreon, usually centred around the lunar cycles. She’s on a journey to heal generational trauma through astrology, tarot, witchcraft, therapy and manifestation. You can find her writing about these themes on Instagram @Daisy Forrest, or on her website daisyforrest.com

This page is part of our comprehensive list of the 22 major arcana tarot cards & their meanings. If you enjoyed the read, then you’ll love the following articles. 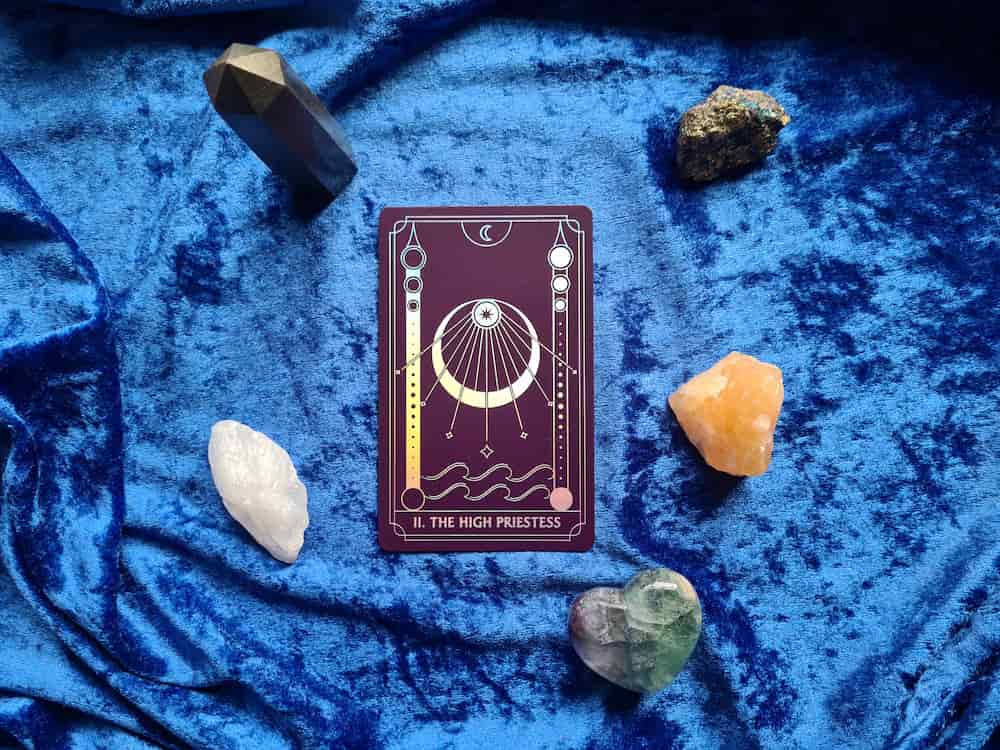 Discover the many different meanings behind the High Priestess tarot card: She is an invitation to go inwards and to trust what you find. 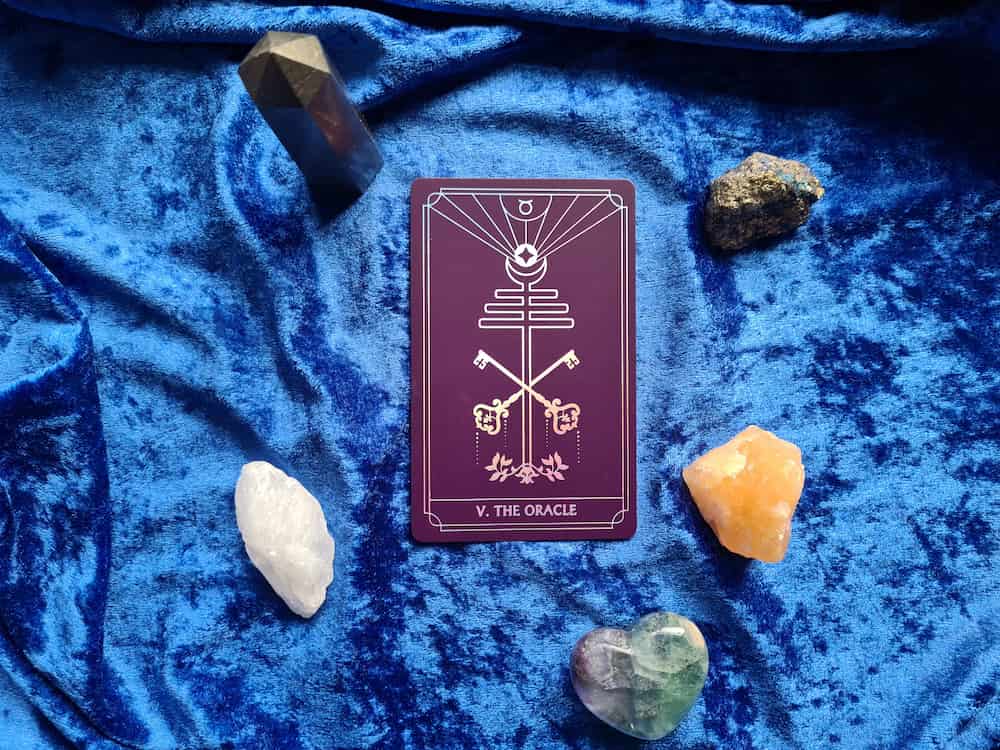 The Hierophant represents authority like that of the High Priestess, but an authority that comes from external sources rather than her internal wisdom.